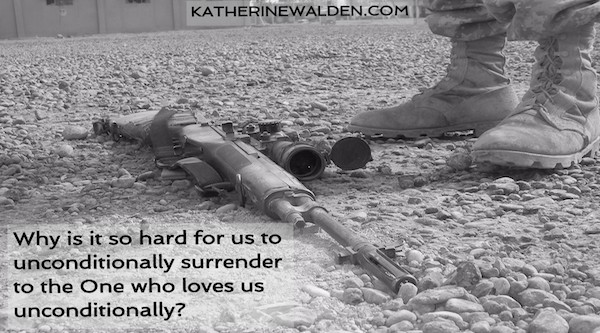 Why is it so hard for us to unconditionally surrender to the One who loves us unconditionally? Could it be that we still do not trust Him?
—
Heart pounding, sweat dripping from his forehead, the young soldier peered out of his foxhole. His commanding officer had told him to guard his vantage point at all costs as the rest of his troop scouted the land, but that was hours ago. As the long lonely night gave way to daylight, he heard heavy gunfire in the distance. His comrades failed to return that evening and the lad realized that he was alone. The enemy surrounded him. He was hungry and desperately thirsty. He had depleted his rations days before.

If the lad had any doubt about the seriousness of his situation, three words shouted in his direction from the enemy’s camp made his choice clear. “Surrender or die!”

His superiors warned him; to surrender to the enemy meant torture, deprivation, solitude and starvation. He had read the sensational headlines in all the military newspapers. His nation’s official radio broadcasts told of the barbaric war atrocities committed by the enemy. And yet, the youth had come to the end of himself. He was hungry, sick, and he ran out of ammunition. Shakily tying a dirty old handkerchief to the end of his rifle, the lad rose to his feet, resigned to his fate.

His captors interned the younng soldier in a prisoner of war camp in rural Alberta, along with hundreds of other young soldiers captured by Canadian troops during World War Two. He lived in a large airy barrack, had plenty of nourishing food, and received excellent medical care. His overseers encouraged him to pick a trade and provided instructors. There were no forced indoctrination sessions. After living in the camp for a few months, restrictions lifted and he was free to move about the camp. He had ample space to exercise, and after his work, he had free time to socialize.

The lad joined the ranks of those who proved themselves to be reliable and trustworthy. Local farmers offered these young men work during harvest time in exchange for room and board and a bit of spending money. Through the example of the Canadian people he met, the boy eventually realized that the nation that he fought to defend had deliberately misled him.

After the war, many of the young men in the camp wanted to stay in Canada. Most were shipped back home. A few made it back to Canada, and many of those brought their families with them. Many settled within miles of the camp.

Although I used a bit of creative license to flesh out the tale, this scenario played out across my nation in World War Two. One of my father’s close friends was a former prisoner of war who was interned not far from where my father grew up on his family’s farm. They didn’t meet until years after the war. I remember Zeg with fondness, but it wasn’t until after his death that my father told me how he landed up in Canada. A few years after that conversation, I happened upon a documentary that collaborated all my father had shared with me.

As I watched the documentary progress, I felt the nudge of the Holy Spirit. “Pay attention!” I was drawn to the act of surrender these young men took. Most did so out an act of desperation when they were abandoned behind enemy lines.

The dictionary definition of the word surrender is enough to send a chill down many a back. I can’t imagine how terrified these indoctrinated soldiers were as they raised the white flag.

The enemy of our hearts abuses the fear of surrender that was planted in our hearts through Adam’s fall. He whispers in our ears. “If you surrender to God, you’ll give up control, you’ll lose any semblance of freedom.”

He distorts God’s truth and twists it, filling us with dread of the horrible things that might happen to us if we were to say, “God, you are in control, not I.”

“Maybe God will send you to Siberia.” He lies. “Maybe He will tell you to give all your money to the poor; maybe He will take away your children, maybe He won’t let you make a decision, ever again.” If we allow the enemy an audience, he will use his platform to sow seeds of doubt about God’s character. “Look at all the horrible things the martyrs went through when they surrendered their lives to God, don’t do it, don’t go there! You can’t trust Him!”

If we listen long enough, we will cling to our lonely outposts, without any resources. We are at the end of ourselves. Those we thought would stand by us have abandoned us. And we still find it nearly impossible to wave that white flag.

God’s call to surrender is not an intimidating, angry bark heard from the other side of a battlefield. God’s invitation to surrender is expressed through the example of his Son, Jesus, as described in Philippians 2:5-11.

“Have this mind among yourselves, which is yours in Christ Jesus, who, though he was in the form of God, did not count equality with God a thing to be grasped, but emptied himself, by taking the form of a servant, being born in the likeness of men. And being found in human form, he humbled himself by becoming obedient to the point of death, even death on a cross. Therefore, God has highly exalted him and bestowed on him the name that is above every name, so that at the name of Jesus every knee should bow, in heaven and on earth and under the earth, and every tongue confess that Jesus Christ is Lord, to the glory of God the Father.”

Through the ultimate act of surrender, Jesus paved the way for us to enter the fullness of all the blessings our Heavenly Father created us to receive. However, we can only receive these benefits by walking through the door titled Surrender.