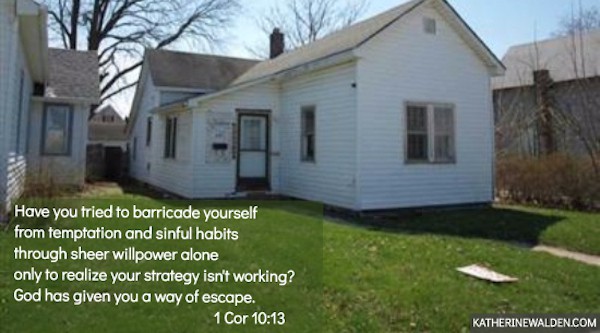 “If you…come to Christ, he will appear as a Lion, in his glorious power and dominion, to defend you. All those excellencies of his, in which he appears as a lion, shall be yours, and shall be employed for you in your defense, for your safety, and to promote your glory; he will be as a lion to fight against your enemies. He that touches you, or offends you, will provoke his wrath, as he that stirs up a lion. Unless your enemies can conquer this Lion, they shall not be able to destroy or hurt you. Unless they are stronger than he, they shall not be able to hinder your happiness.
Jonathan Edwards”

Just before I awoke one morning, I had a vivid dream. In that dream, Someone gave me a heads up that a psychopath had targeted me and planned to kill me that day.

I decided to hole up in a slightly run down 1930s style bungalow. I wasn’t overly fearful although there was a growing sense of concern. When the maniac arrived, I barricaded myself in a bedroom. The door was constructed from flimsy wood paneling, and I knew it would be easy to break through. I tried to jam a bureau under the door handle, but the dresser was not high enough. As the psychopath broke through one of the wood panels, fear arose, but I was not panicked.

I looked around the room for resources, and that is when I found a door leading outside. I hadn’t been aware of that door before. I safely exited the house just as the bedroom door was being pushed open by my pursuer.

I had no sense of urgency. When I secured the outside door, I realized that it locked from the outside. There was no way to unlock the door from the inside. After taking a few steps away from the house, I looked back. The door from where I exited no longer existed.

It was a bright, sunny summer day and a light breeze refreshed me as I strolled down a peaceful, pleasant sidewalk.

When I awoke, I felt refreshed and hopeful.

I had a strong sense God gave me this dream to share with others.

1 Corinthians 10:13 – “No temptation has overtaken you that is not common to man. God is faithful, and he will not let you be tempted beyond your ability, but with the temptation, he will also provide the way of escape, that you may be able to endure it.”

Perhaps the Lord has warned you that areas of your life that will harm you if you don’t do something about it. Perhaps you have tried to barricade yourself from temptation or sinful habits by avoiding the issue. What you can’t see won’t hurt you, or so you try to convince yourself. Perhaps you’ve tried to resist temptation through sheer willpower and positive confession. You’ve discovered how flimsy your self-defense strategy is. Look around; the Lord has provided a way of escape. Walk through it into the light.

“When you defend yourself, you have only your two hands and your own human resources. But when you let Jesus take up your defense, He defends you with His nail-pierced hands and His legions of angels! The results will be amazing.”
Joseph Prince