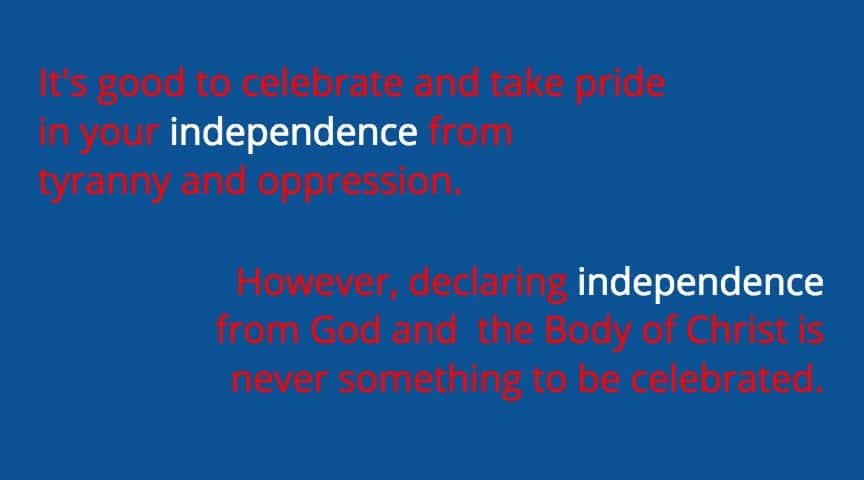 I am contemplating Independence Day today as my American friends celebrate their freedom. Independence from tyranny and oppression is a glorious thing, and it should be celebrated. Americans can take pride in the can-do spirit that helped carve out the nation it is today. Nevertheless, it’s ironic that America would not have won her independence from Britain without the support of France and Spain.

God does not consider independence from Him as something to strive towards. It is true that as we mature in our faith and intimacy with Him, we find ourselves imitating Christ in our daily decision process. To put it in the vernacular, we become a chip off the old block. As much as this pleases our Heavenly Father, He still welcomes us to seek His opinion about the decisions we make in our lives. We would be foolish children indeed if we would ever think we ‘outgrew’ the need to depend on His wisdom.

There are some Christians who are so insecure about their ability to do the right thing that they won’t blink without checking first with God to see if it’s okay to blink. God is not a ‘helicopter’ parent stifling His children’s growth by making every decision for them.

However, it is only through spending time in His word and by spending time in prayer and conversation with Him that we gain the ability and the confidence to learn to make right decisions. Our Heavenly Father places a multitude of counsellors around us; it is the wise child who receives confirmation and counsel from their brothers and sisters in Christ.

Never become overly confident in your innate ability to do the right thing, By doing so, you step into arrogance and pride, deafening your spirit from hearing the Lord when He calls you to seek His face for His opinion!