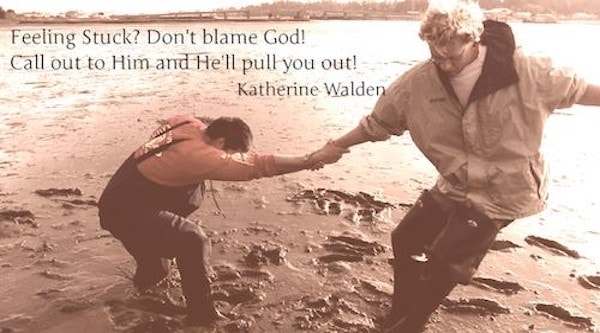 A 46-year-old woman tragically lost her life when she chose to deliberately ignore the warning signs and drive through glaringly obvious road traps set in place to keep the general public safe during the 2017 floods in Northern California. Her death was not the result of an absentminded or distracted driver. The road blocks were set in place in such a way she would have had to plan her folly. My prayers were lifted up for her family, but I also couldn’t help but wonder. What were her final thoughts? Did she cry out to God? Did she curse Him for putting her in a predicament?

Proverbs 19:13 – “When a man’s folly brings his way to ruin, his heart rages against the Lord.”

Some days, don’t you just want to scoop up the hurting people around you and hug them close and kiss away all the boo-boos? If only it were that simple. Stepping back and allowing them the freedom to make what you consider to be harmful and foolish decisions is so painful.

How does God do it? How does he watch his beloved children walk right into traps that he has lovingly warned them about only to watch those same kids angerly shake their fists at Him when they fall into those traps? We even have the gall to blame Him for setting the trap!

And yet, when we call out to Him, even as we are stuck in the muck and mire of our foolish decisions, He helps us out of those traps. Our Heavenly Father brushes us off and points us to a better way no matter how many times we wilfully choose to ignore His wisdom.

1 Corinthians 10:13 – “No temptation has overtaken you that is not common to man. God is faithful, and he will not let you be tempted beyond your ability, but with the temptation he will also provide the way of escape, that you may be able to endure it.”