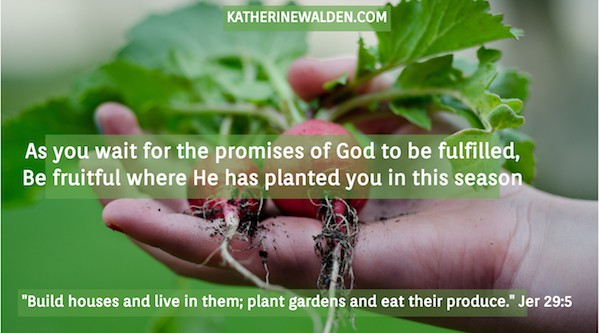 Waiting for the fulfillment of God’s promises is never easy and the longer you are in the waiting, the more you are tempted to fall for the lies of the enemy. “He forgot you.” “You really didn’t hear from God in the first place.” “What is next for you is better than here, so why not just phone it in as you’re waiting?” “Don’t invest in relationships now, you’ll just have to let them go when God moves you on, and that’s too painful.” “Don’t help your community where you are at, people will be too dependent on you, and you’ll leave a huge void when God releases you to move forward.” If we give into these lies, we will slumber in our spirits and slow the process God has put into place to see His works become manifest in our lives.

A few years ago, dear friends of mine moved across the country to help care for his elderly mother.  It was a considerable sacrifice as my friends were well established in our church and community. They had many close friends here.  He was looking forward to retirement and she enjoyed her part-time job in the neighbourhood. It tore our hearts as much as it tore theirs to see them go. It became apparent pretty quickly that the plans they had made to care for his mother in their home were going to be delayed. That delay eventually turned into an impossibility due to his mother’s failing health.  They both found part-time work and did what they could to help his mom.  They found a local church almost immediately, but it wasn’t like the church they left behind. It was hard to make friends in the tight-knit town although their church was welcoming. It was harder for the daughter-in-law, as her role wasn’t as defined in the caregiving of her husband’s mother.  She felt at loose ends, and she was lonely.  She had her own hopes when it came to the move, and those expectations were met with disappointment as well.

She called me one day as she was very homesick. As we talked on the phone, I felt the Lord give me this passage from Jeremiah for her. “Build houses and live in them; plant gardens and eat their produce. Take wives and have sons and daughters; take wives for your sons, and give your daughters in marriage, that they may bear sons and daughters; multiply there, and do not decrease. But seek the welfare of the city where I have sent you into exile, and pray to the Lord on its behalf, for in its welfare you will find your welfare.”  Jeremiah 29:5-7 (Emphasis mine).

As we prayed and talked, I felt the Lord go on to say, “Plant seeds in the garden I have given you, bring my best where you are. Bring my peace to the town where you now live, and shift the atmosphere through just being who you are, kind, gracious and welcoming.” Now, neither one of us thought that God had sent her and her husband into exile. However, I felt God was saying that she could flourish where she was planted!  She took God’s words to heart and asked for His help to see the good in her situation. Slowly, the dark cloud began to lift, although their stay was not an easy stay.

My friends’ mother eventually passed away, and they deeply grieved her loss. Several months later, they were able to move back to our city and were welcomed with open arms.

At present, I find myself in the waiting. God brought this scripture passage back to me. Although I am in the waiting, He is urging me on. Plant a garden, be part of the community, pray for my leaders, don’t just sit at the exit door, waiting for it to open so I can go on to whatever God has for me next! There is still much to be done.

If you find yourself in a season of waiting, I would encourage you to go to Youtube and listen to the following song. It should be released on an album in early 2017.  It speaks to my heart; I know it will speak to yours.

Slow down, take time
Breathe in, he said
He’d reveal what’s to come

My thanks to my friend, who graciously allowed me to share her story with you.

All Bible verses, unless otherwise attributed, are taken from the English Standard Version (ESV).