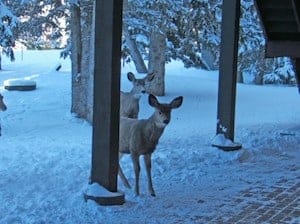 Several years ago, I attended a conference that was held in a picturesque retreat centre nestled in the foothills of the Alberta Rocky Mountains. We dined on the Word of God and feasted on God’s presence as we prayed for our denomination and Canada at large. The fellowship around God’s table was something that I still treasure to this day, and I came away with nuggets of truth and grace that I received from watching those around me love and honour each other well.

The hospitable support staff at the retreat centre outdid themselves, providing us with a loving, caring and nurturing environment. They catered to our every need and spoiled us rotten in the process. Comforting home-style meals were served in a bright and sunny dining room that looked out on a grassy meadow that was surrounded by trees and brush. The only thing separating us from the outdoors was a ceiling to floor window that provided a breathtaking view for diners. However, we were not the only group who took advantage of the window.

One morning, I glanced up from my second cup of coffee and was startled out of my sleepy morning fog by the sight of six or seven mule deer that wandered within a couple of feet of the floor-to-ceiling window. I had no idea how long they had been there; they stood perfectly still as they looked in the window. I didn’t sense they were waiting for handouts. Someone near the patio door tossed some granola to them, but they showed no interest. If anything, they appeared to be curious about us, and they seemed content, watching us for several minutes before they moved on to graze.

Someone at my table quipped, “Now we know what it’s like to be on the other side of the animal enclosures at the zoo.” We all laughed, and she continued. “Imagine their conversation, ‘All those humans ever seem to do is eat, eat, eat and make those silly noises. They look almost intelligent from this angle, don’t you think?’” Being different species, we could never communicate with the deer nor they with us, but it was fun to speculate nonetheless.

My church meets in a section of the city that has a high population of refugees and newcomers to Canada. For many years, we reached out to nearby schools through a puppet club program. Once or twice a year, those children involved put on a puppet show for their parents and friends during a Sunday service that primarily focused on the kids in our neighbourhood. As a result, we would often have visitors who had never been in a church service before. A good number of our guests were recent arrivals to our country and struggled with English. Our lack of a commonly spoken language put us at a disadvantage.

Our style of worship and the following puppet show befuddled many of our guests that morning. However, we did our best to communicate the love of God through our hospitality. We hoped that by watching the interaction between their children and our children’s pastor, they would understand why their children loved coming to the puppet clubs. Our visitors could only smile in response when we greeted them at the door, and they could only express their thanks in broken English as we served them coffee and a few treats at the end of the presentation. We had no idea what they thought; we could only pray that they were touched by God’s heart demonstrated to them in practical ways. It was our hope that the gospel was preached without words that morning, as Francis of Assisi once said.

Over the years, several of our guests become our friends. As their English skills improved, they were finally able to express their gratefulness for the love we showed them. We needn’t have worried that our message was lost in translation. Love was the universal language that knit our hearts together.

Jesus spoke directly about our responsibility to represent him in Matthew 5:16 when he said, “In the same way, let your good deeds shine out for all to see, so that everyone will praise your heavenly Father” (NLT)… We owe it to Jesus to do the best we can to honor his sacrifice, and we need to recognize that the lost of the world are watching to see how were doing. – John Atkinson