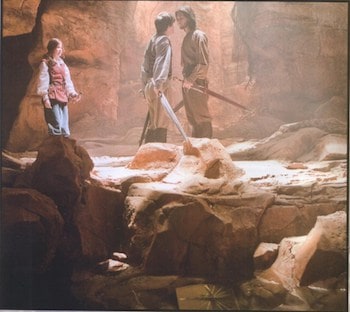 There is a political spirit and a religious spirit that are working in tandem to bring division and destruction in the church at large. I have seen these at work before but never to the extent I have seen them at play in the last eight years.

In C. S. Lewis’s brilliant allegory, the “Voyage of the Dawntreader”, the author speaks of this tactic of the enemy. The children and Prince Caspian stumble across a lake that turns anything to gold when that item is dipped in its waters. Caspian and Edmund almost come to blows over it, both throwing around their ‘position and status’ in the realm to claim their rights. Caspian appears ready to fight over it; his hand rests on his sword’s hilt when Lucy suddenly sees Aslan. They all see him and watch as he walks across a ridge not far from them. He says nothing – but whatever spell they were under is broken as their gaze rests on the lion.

I see the same spirit that CS Lewis was addressing in the “Voyage of the Dawntreader” in today’s political climate within churches. This spirit is not just all about what political party or political leanings people might have. The enemy not only wants to bring division, but he also wants to kill.

When the children gazed down into the water, they saw all to clearly what happened to someone who dived into the ‘greed and lust for power and control.’ What first appeared to them as a masterpiece became a horror to them, and they recoiled. They realized greed and the thirst for potentially unlimited power had consumed the poor lost soul.

I have sensed a controlling spirit while observing otherwise sane and level-headed people discuss politics or doctrine in Social Media and over casual coffee with friends. Anger, control, and accusations spring up suddenly. It is much much stronger than I have ever seen it before. I must confess that I have had to do battle against the temptation to fall into its spell on more than one occasion. I am naturally a pretty easy-going person, not easily riled up to anger.

Why is this spirit so strong? It has been given fuel. The only way to starve it is by walking in the opposite spirit.

The following may seem like a far-fetched analogy, but the Lord brought to my mind an episode of the original Star Trek series. The Klingons and the Enterprise crew are locked in a battle on the ship that appears to be going on forever. They rehash old skirmishes again and again and again. A Klingon woman sees what is going on, that an alien life force that feeds off of antagonism is orchestrating the whole battle. She finally convinced the powers-that-be that the only way to end the battle was to call a truce – and to take it a step further. Respond in the opposite emotion. They all begin to LAUGH, slapping each other’s backs and make fun of the whole situation. The alien lifeforce disappears. While the Klingons and the crew end up hating each other again in later episodes, they worked together to defeat a foe they would never be able to defeat by their own power.

When confronted with a strong reaction within you that wants to argue with another believer over politics or doctrine, step back and assess the situation. Ask yourself, why is your emotional response so strong?  When otherwise level-headed and non-aggressive friends and acquaintances come against you in a verbal attack, determine to sidestep the blow.  Refrain from reacting in kind to the assault.

Do your best to focus your attention on the One who binds you together. Deliberately change the subject, start talking about what God is doing in your midst, bring the gold out in the other person, point to their good! Encourage the other person by reminding them on just how God sees them as His child. Resist flattery but speak to the good! If need be,  walk away from the confrontation, and you will keep a brother from stumbling.

All bible verses are taken from the English Standard Version translation.